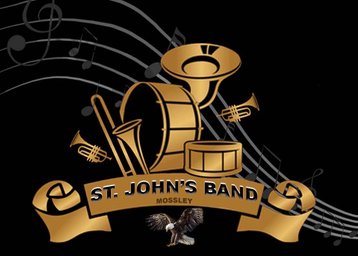 St Johns is a friendly community band based in Mossley.

We have just recently started our rehearsals again on Thursday evenings, our training band rehearse inside the Yorkshire Ward Conservative Club, Mossley from 7.15pm to 8pm. Our Main Band are temporarily rehearsing outside the Yorkshire Ward from 8pm to 9.15pm, we are hoping to get back to regular rehearsals indoors as soon as its safe to do so. If you are interested in joining the band please contact Paul Towle at paul@stjohnsband.co.uk. All playing standards are welcome as training can be given to inexperienced players.

Durning the lockdown we have kept ourselves busy with weekly solo competitions and a few distance banding videos, you can view these on our gallery page. This has all been fun but its good to finallly be able to rehearse together.

We are available for all types of brass band concert performances to cover all tastes and occasions.  If you would like to arrange for the band to play at your event, please contact the band Secretary at tel. 07885 590 012 or  info@stjohnsband.co.uk

History of the Band

The Rev.W. Leeming was the man responsible for the formation of St Johns Band Mossley in 1933. He was a great Brass Band enthusiast and had formed Brass Bands at all of his previous churches as way of extending  the social and cultural activities of the church. At the formation prospective players, who had to be communicant members of the church, got together to form the nucleus of the band. By May 1934, after a lot of tuition and marching drills up and down Quickedge in all weathers, the band were ready for their first Whit Friday Walks. They wore uniforms purchased from Eagley Mills (Bolton).

During the war St John's became the band of the (Home Guard) 35th Cheshire Regiment. At the cessation of hostilities membership rules were relaxed so that players from outside the parish could join, gradually building the band up to full strength.

In 1983 the band reached one of its highest points by qualifying to play in the Fourth Section of the National Brass Band Championships of Great Britain at the Royal Albert Hall. Unfortunately, the band was unplaced, but what an unforgettable experience for those involved.

Nevertheless, with players leaving for various reasons  over the years the band has been on the verge of closure on three occasions, twice in the early seventies when the band was lacking in numbers to lead the church in the whit Walks and once again in the late eighties when the band was struggling to hold rehearsals with regularity.

Then in 1990 a group of community minded people notably Ralph Towle, Rodney Oliver, Ian Marsh and Barry Hague formed a committee inviting first Max Wassal as Secretary, later Graham Hutchinson and Stephen Corbett to coach and train the band made up mostly of school children. This proved to be a huge success and Stephen stayed at the band as musical director until 2012.

In 1995 once again the band lost players when six of its leading members went to university, a body blow after three years of successful results at contests. In seventy-five years (three generations) the world, peoples lifestyles and interests have changed immensely and the band has had to change suit.

In 2012 the band were joined by Musical Director Paul Exton-McGuinness. Since then the band have gone from strength to strength, with a new training band and beginner band to focus on eventually bringing fresh new players in to the main band. Paul left the band in July 2018.

In September 2018 Paul Towle was appointed as Musical Director, Paul has long running family connections with the band, his Grandfather, Ralph Towle being one of the leading members of the  group that helped get the band back on its feet almost 30 years ago.

Although the band is not directly linked with the church anymore, they do provide the music for the services throughout the year such as Christmas, Harvest and of course the Whit Friday Walks. 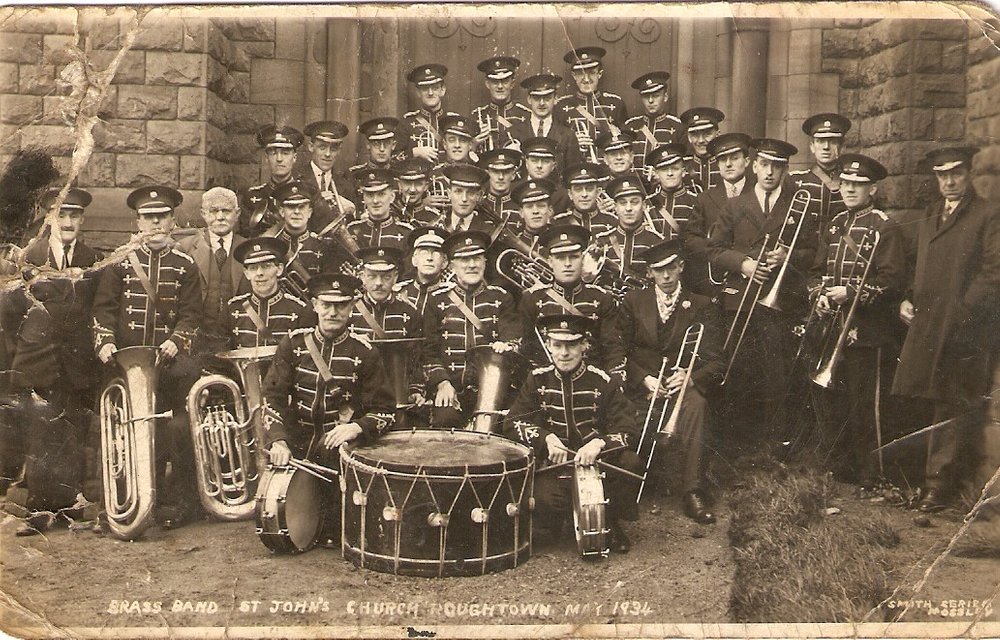 For any info or bookings please contact our secretary, Andy Duncan at info@stjohnsband.co.uk

For information on rehearsal times or joining us you can contact our Musical Director, Paul Towle at paul@stjohnsband.co.uk